Laxmedals.com has been selected to provide the team championship awards for the Men’s and Women’s division champions for The Las Vegas Tournament. “The sport of lacrosse just continues to pop up in great venues and what better place to attract a bunch of lacrosse players than Las Vegas.”  Says Mike Rogers, President of Laxmedals.com. “We thought our Heritage plaques with custom plates would be a perfect presentation award for the event champions. We are excited to be part of The Las Vegas Lacrosse tournament for years to come.”

Presented to Douglas Stone in recognition of the 1928 Friend’s School Varsity Boy’s Lacrosse Baltimore City Athletic League championship. Born in Baltimore, Maryland on March 29, 1911, Douglas attended Johns Hopkins and was a member of the 1932 Hopkins Lacrosse team, which participated in the Olympic Games lacrosse exhibition in Los Angeles. Reverse engraved “City Championship 1928” and then the initials “D.H.S.” by his hand. Manufacturer was the Robbins Company, Attleboro, Mass. Color gold with blue drape ribbon. Measures 1.75 x 1 inches.

Laxmedals is proud to have begun production of the 2014 Brogden Cup Lacrosse Championship award medals. The medals will feature the Laxmedals classic “Traditions” artwork with a custom event lanyard. The Brogden Cup is presented by Level 2 Sports, LLC located in Owings Mills, Maryland.

The Brogden Cup is an historical and meaningful lacrosse event promoting international fellowship between the United States of America and Canada and is a preview of the top U19 lacrosse players in North America . The three-game Brogden Cup series named for H. McCullough Brogden, who was a member of the 1932 and 1933 Johns Hopkins University teams and the 1932 Olympic team.  “To be asked to be part of such a prestigious event between the world’s great lacrosse super powers is an honor.”  Says Mike Rogers, President of Laxmedals.com. “Level 2 Sports continues to take lacrosse in new and exciting directions and produces the finest lacrosse events. To just be even a small part of their program is exciting for Laxmedals.com and I think a testament to our product quality.”

In addition to the Brogden Cup, Level 2 Sports hosts the annual National Lacrosse Classic the nation’s premier lacrosse recruiting showcase. Entering it’s 7th year, the 2014 Brine National Lacrosse Classic and Brine National All Star Lacrosse Academy bring together the finest players and coaches offering extreme competition and exposure to the next level of the sport. Information on registration for the 2014 regional team tryouts can be found by visiting the link below. For more information on Level 2 Sports and the Brogden cup please visit http://www.nationallacrosseclassic.com/.

The Laxmedals “Traditions” medal. Embodying the spirit of the Native American heritage of the game of Lacrosse. 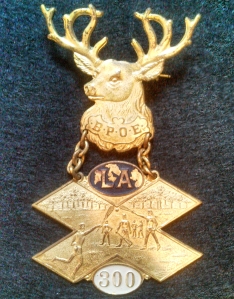 My latest find is the medal shown above was created for the 1906 annual convention of the Benevolent Protective Order of the Elks (B.P.O.E) fraternal organization. The collector actually had 2 of these very rare medals and I purchased both. The La Crosse, Wisconsin delegates of the B.P.O.E chose to feature the game of lacrosse on their convention badges because their native city was named after a sporting contest that used sticks and a ball the nearby native inhabitants were playing. According to the La Crosse, Wisconsin history records, the city’s name was derived from “…the game with sticks that resembled a bishop’s crocier, or la crosse, in French, which was played by Native Americans in the vicinity.”  The sport created by Native Americans we all now know as, Lacrosse.

This is truly one of the most unique and obscure vintage lacrosse medal I have found to date, which features a very big and beautiful elks head pin above the lacrosse motif badge. The scene of men playing lacrosse is interesting in that the sticks are relevant to the origins of the game and the figures appear to be Native Americans, or so I am guessing with their bare chests, long leather stitched pants, and braided hair.  The medal was produced by the Scwaab Stamp & Seal Co. of Milwaukee, Wisconsin.  The company was founded in 1881 and still exists in Milwaukee making rubber stamp and embossing tools.

My passion for lacrosse medals not only rests in the medals I design for the current game of lacrosse…I seek out and collect vintage lacrosse medals.

The whole idea of creating Laxmedals.com originated from my wanting to recreate the quality and uniqueness of old lacrosse medals just like the ones you see below. My first vintage lacrosse medals were presented to me by Douglas H. Stone M.D. A graduate of Friends School of Baltimore and Johns Hopkins University. Douglas was a member of the 1932 Hopkins Lacrosse team, which participated in the Olympic Games exhibition in Los Angeles, California. (no I do not have a medal from this event that might have been presented to this team by the Olympic Committee, the Holy Grail of all Lacrosse medals I would assume…) After graduating JHU medical school in 1937, Douglas began practicing as a surgeon and when war came in 1941 Dr. Stone and his colleagues were called upon to establish mobile surgical hospitals for the Army. Dr. Stone eventually landed with the third wave of infantry on the D-Day beaches in Normandy, France in the evening of June 6, 1944. He and his unit began saving lives for endless days and nights under constant enemy fire. His unit served through to the end of the war constantly on the front lines and on a few occasions behind the enemy lines. I was fortunate to have met Douglass before his passing and include his wartime stories in my book, Answering Their Country’s Call: Marylanders in the Second World War (Johns Hopkins Univ. Press, 2003)

On the occasion of our last conversation in the summer of 2002, Douglass said he was sending me some things he didn’t know what else to with. I received a package a couple weeks later from his wife, Essie, sadly along with a letter informing me Douglas had passed away a week prior. But, following through on his wishes she sent me the box he had prepared to send me. To my disbelief, inside the box I found several vintage medals featuring the game of Lacrosse. I was truly touched to have been the recipient of something so personal belonging to someone I admired so much. Thinking back, we had chatted briefly about my lacrosse playing days at Rutgers during our interviews for the book and I guess he figured I would appreciate his medals. I surely did appreciate the medals and still have them in a frame over my desk.

My collection has grown to about dozen vintage medals dating from the late 19th Century to the 1950′s. I really enjoy researching the history behind each medal and there is always something to learn about the history of the game. I often wonder what reaction players of old would have to see the modern game…to see the result of their passions in keeping the game alive through the years. And before I began this collection I never would have ever imagined they even made lacrosse medals back in the 1890′s!

Douglas stone and his lacrosse medals are my inspiration for collecting vintage lacrosse medals and are the genesis for the creation of Laxmedals.com. I thought I would have appreciated receiving award medals like his during my playing days, and I was sure others would too. Since my creation of Laxmedals.com, I have been proven right a thousand times over from all the smiles I see on the faces of the kids and grown adults receiving my medals. I am proud to have met and known Douglas Stone and to share a part of his life with you, the story of a real hero. I hope the story of his life and his lacrosse medals inspire you as they continue to inspire me.

Please visit this link to view photos of my collection and read about some of the history behind each medal http://laxmedals.com/vintage.php