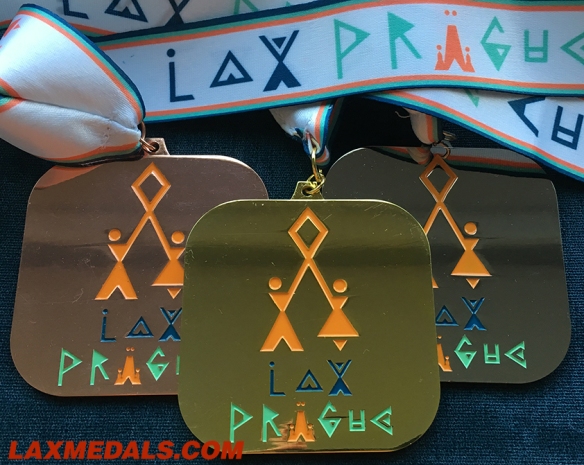 Laxmedals.com announced today it has been chosen to supply the 2016 Lax Prague European Championships with its award medals. “Laxmedals.com is truly an international leader in Lacrosse awards and it is an honor to be chosen to design and deliver the award medals for the 2017 Lax Prague games.”  Says Mike Rogers, President of Laxmedals.com. “When I think about how we started this company Laxmedals.com making custom medals for local lacrosse clubs and tournaments and now how I see packages going out every day to places all across the globe…not only is it awesome to see how the sport of lacrosse has expanded and grown during my lifetime, but to know Laxmedals.com products are growing right along with it is gratifying. We work so hard to design and produce the world’s finest lacrosse awards and having the Lax Prague games handing out our medals is truly an honor.” 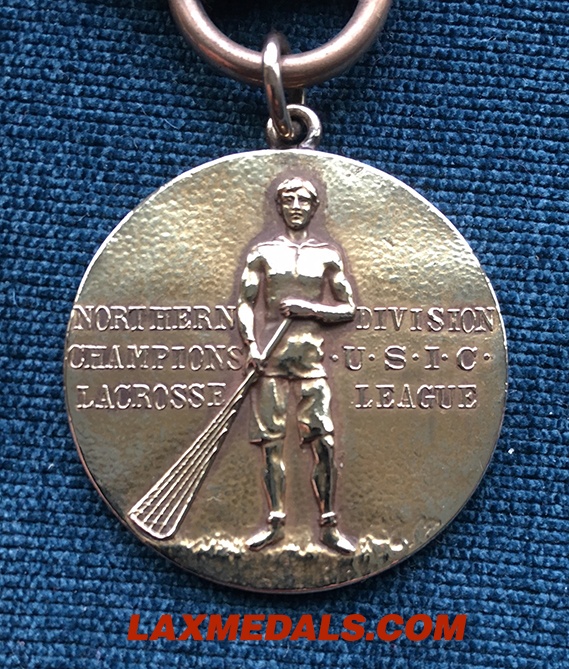 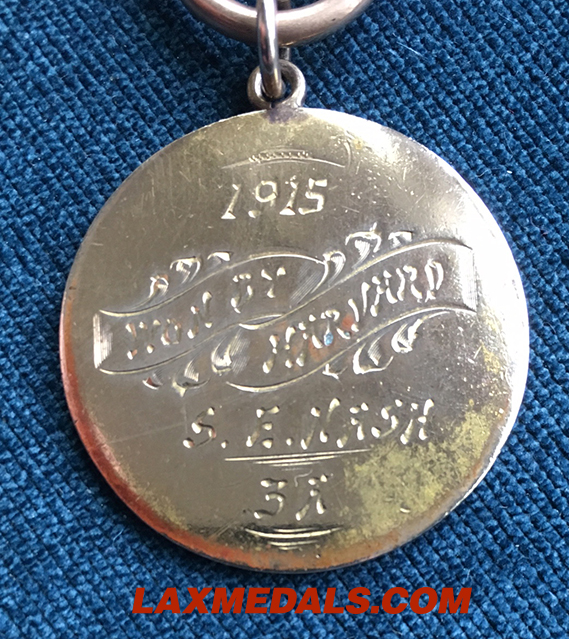 This medal was presented to Harvard Junior Samuel Elliott Nash ’16 following their 1915 Northern Division Championship season. Nash was 3rd Attack for the 1915 squad who had a season record of 5-3 with wins against the Mount Washington Athletic Club (3-2), Stevens (13-1), Hobart (8-2), Cornell (4-2) and Yale (8-4). Losses were to Boston Lacrosse Club (9-4), Crescent Lacrosse Club (4-2), and Johns Hopkins (8-1). Nash briefly taught at the Millbrook School in Concord until he enlisted in the U.S. Army and assigned to Company B, 301st Infantry, 76th Division. In May of 1918, Nash was promoted to Sergeant and transferred to the 301st Infantry Band. A year later was promoted to 2nd Lieutenant and appointed bandleader until his discharge in July 1919. No other information could be found. No maker marks found appears to be gold plate over brass or copper.

For more information on more vintage medals in the Laxmedals.com collection and to buy custom lacrosse medals and awards please visit http://www.Laxmedals.com or call 443-955-4118.

Laxmedals.com MVP plaques are beautiful presentation pieces to recognize your lacrosse champions!  We use only Made in the USA solid handmade wood plaques made from Virginian Walnut, we then apply our special trademarked 3D art lacrosse medallions in a large 5-inch format. Finally, a full color custom printed plate is added to complete this special presentation piece. Plan ahead these beauties require a little time for production and retail for only $39.99 plus shipping.  There is no substitute for Laxmedals.com quality and value.

Laxmedals.com – Where Passion for Lacrosse is Forged into Medals. 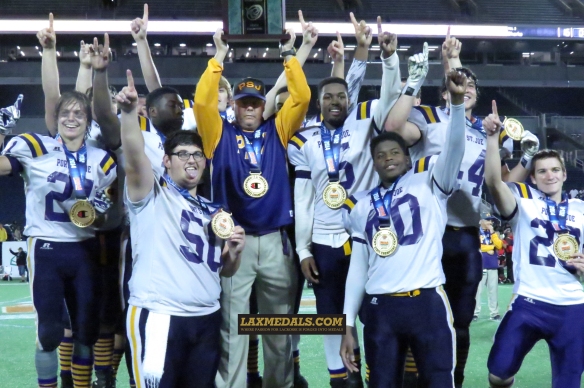 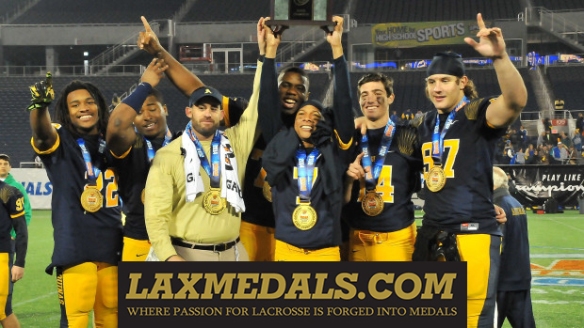 LAXMEDALS.COM ANNOUNCES IT HAS DELIVERED THE 2014 CHAMPIONS MEDALS FOR THE FLORIDA HIGH SCHOOL SPORTS ASSOCIATION (FHSSA) STATE FOOTBALL CHAMPIONSHIPS HELD DECEMBER 13-13, 2014 AT THE CITRUS BOWL. “TO BE SELECTED TO PROVIDE OUR LAXMEDALS FOR THIS EVENT WAS A TRUE HONOR.” REPORTS MIKE ROGERS, PRESIDENT OF LAXMEDALS.COM. “GRASSROOTS SPORTS CONTACTED US ABOUT PROVIDING MEDALS FOR THIS EVENT, WHICH THEY MANAGE AND DO AN OUTSTANDING JOB GIVEN THE HUGE VISIBILITY OF THIS EVENT. I IMAGINE A GOOD NUMBER OF FUTURE COLLEGE ALL-AMERICANS AND NFL STARS WILL BE TAKING A LAXMEDALS MEDAL HOME WITH THEM FROM THESE CHAMPIONSHIPS.

Laxmedals.com is proud to be the provider of the sweetest lacrosse awards to the “Sweetest Lacrosse Tournament on Earth” the Hershey Lacrosse Shootout presented by Mylacrossetournaments.com.

“Always an honor to be selected to provide awards to one of the largest and most exciting lacrosse tournaments presented by a premier lacrosse event company” Says Mike Rogers, President of Laxmedals.com. “Who doesn’t like lacrosse and chocolate…a sweet combination. We think we created a sweet medal for the event.”

For more information on the Hershey Shootout and Mylacrossetournaments.com click HERE 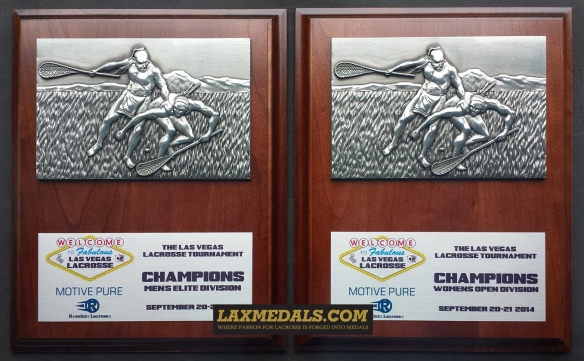 Laxmedals.com has been selected to provide the team championship awards for the Men’s and Women’s division champions for The Las Vegas Tournament. “The sport of lacrosse just continues to pop up in great venues and what better place to attract a bunch of lacrosse players than Las Vegas.”  Says Mike Rogers, President of Laxmedals.com. “We thought our Heritage plaques with custom plates would be a perfect presentation award for the event champions. We are excited to be part of The Las Vegas Lacrosse tournament for years to come.” 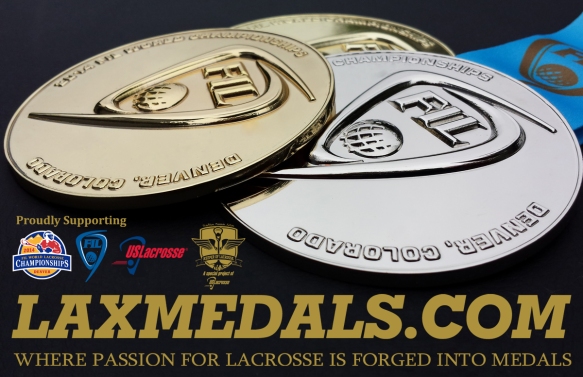 Laxmedals.com is the medal of lacrosse champions. Laxmedals has had no greater honor than to provide the championship medals for the 2014 FIL World Lacrosse Championships in Denver, Colorado this past July. Team Canada pulled a great upset of a powerful US Lacrosse squad and the Iroquois Nation secured third place its first championship finish in its long history of their game of lacrosse. “The entire FIL World Championship was an outstanding success for lacrosse.”  Says Mike Rogers, President of Laxmedals.com. “Our medals were chosen from a tough selection process to be presented to just about every champion at all the events at the FIL World Championships, the festival games, and the U-15 US Lacrosse Championships.”

“To have our Laxmedals product presented to the best lacrosse teams in the world is an honor and it again proves Laxmedals.com is the true medal of lacrosse champions!”

The recent FIL World Lacrosse Championships in Denver, Colorado were by all estimates the greatest lacrosse championship event in the long history of the competition. The venue, weather, and enthusiasm of lacrosse fans from 38 competing nations made the energy reach soaring heights. Numerous vendors from around the world presented new and exciting goods and services. Laxmedals.com held the special privilege of being selected by the FIL and US Lacrosse to design and produce the awards for the Men’s Championships, the Men’s Festival Games and the U-15 Championships. “We knew we had to present something unique and beyond the abilities of any of our competition to be selected for this event, which is the Olympics of the Lacrosse.” Says Mike Rogers, President of Laxmedals.com. “There are so many talented lacrosse award manufacturers, but in the end we feel Lamedals.com offers the most unique lacrosse awards on the planet at the best value and quality. I think the FIL and US Lacrosse saw that as well. It was truly an honor to have our Laxmedals presented to the World’s best lacrosse players. I know they will treasure them for a lifetime.” 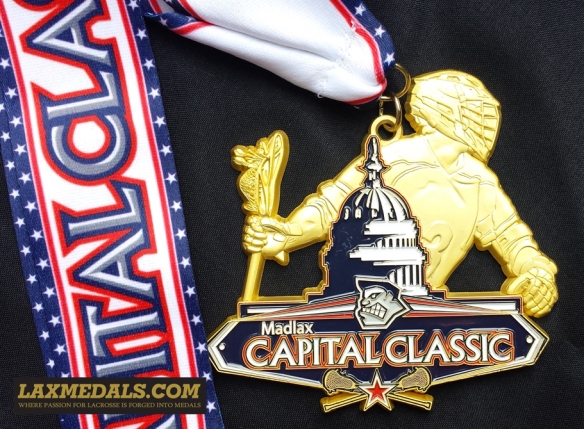 Laxmedals.com is proud to announce it has been chosen to be the provider of the award medals for the 2014 MadLax Capital Classic. “MadLax is an awesome club franchise and excellent tournament provider.” Reports Mike Rogers, President of Laxmedals.com. “It is obvious to me that MadLax is on the cutting edge of graphic arts in the lacrosse community in how they design their custom sports gear, uniforms, and event logos. It was an honor to be chosen to be part of their overall brand image.” The 2014 Capital Classic medal was created combining the patented Laxmedals.com 3D lacrosse art with the Capital Classic logo. The combination made for one stellar award medal for the Capital Classic champions.

To learn more about Laxmedals.com please visit their website at Laxmedals.com. To find a MadLax tournament near you or to purchase their custom uniforms visit Madlax.com.